When I took the kids to the pumpkin patch they were so excited to be able to pick out their very own pumpkins! Little did they know, I had a little something special in store for their pumpkins! We made Mr. and Mrs. Pumpkin Heads…you know, Mr. Potato Head…but a pumpkin! 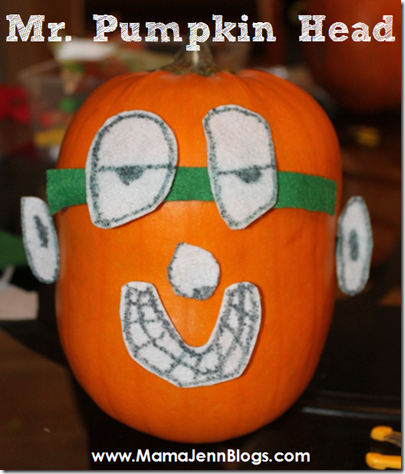 They were fairly easy to make and the kids LOVED making them! Even the 3 year olds got in on the action! They have been playing with their Pumpkin Heads ever since! Yes, the Pumpkin Heads have now replaced the apple dolls! 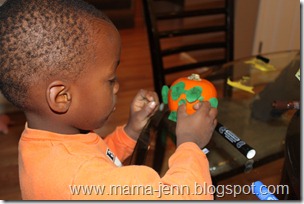 So, to make your own Mr. or Mrs. Pumpkin Head you will need the following.

Cut your velcro (unless you are using the dots) into small pieces and stick them onto a clean pumpkin where you would like to position the eyes, nose, and mouth. (You will only need to use the hard side of the velcro…because you will want the felt to “stick” onto it.) 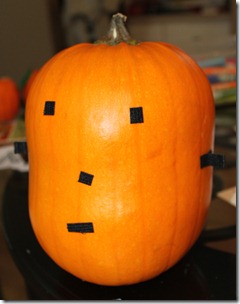 I was a bit stumped with the ears until I figured out that I could use a small strip of the adhesive velcro, fold it in half, while sticking only part of it together. Then I stuck the open part of the velcro onto the pumpkin where we wanted the ears. This allowed for the ears to stick out. Below shows a photo of how to fold the adhesive for the ears. If you click on the image above, you can sort of see what the velcro for the ears looks like after being stuck onto the pumpkin. 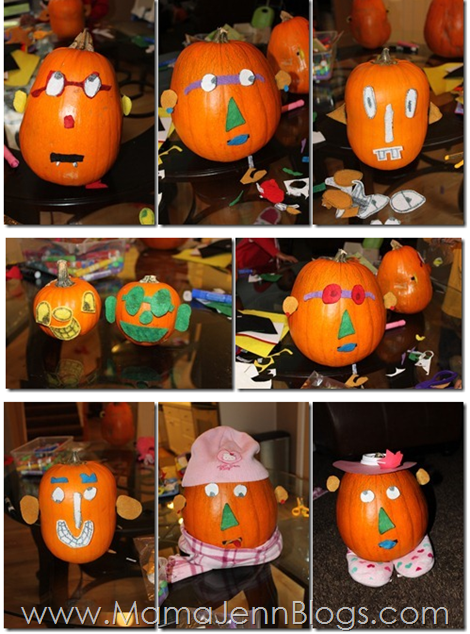 This was tons of fun! It has been a couple days since we made them and the kids are still asking for more felt to make more facial features for the Mr. and Mrs. Pumpkin Heads! I have a feeling it will be awhile before they will be willing to part with their Pumpkin Heads so that we can roast pumpkin seeds!

FYI, this idea was inspired by a similar idea I found in the Family Fun magazine.

Check out some of our other pumpkin activities and snacks below: