You are here: Home / Homeschool / 2010-2011 Curriculum {Recap}
This page may contain affiliate and/or advertiser links. Please review my disclosure policy.

I often wonder how people feel about their curriculum choices AFTER the school year is over. So, I decided to do a RECAP of our 2010-2011 curriculum choices…you know, what we liked…didn’t like…used…didn’t end up using. So let’s start with my daughter who just finished up 2nd grade…

Spelling: We used the Spell to Write and Read Core Kit

. We have been using this for a few years now and will continue to do so! It is a bit teacher intensive, but we are rolling with it! 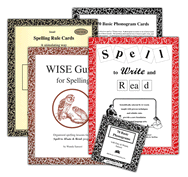 . However, my plan was to use the My Wise Guide Grammar Books created to go along with it. I figured it would save me some time having the pages pre-formatted for me…which WAS very helpful with my boys. However, I didn’t end up using this with my daughter…she just used notebook paper.

Reading: For reading comprehension we used McCall Crabs: Standard Test Lessons in Reading. I really liked this and much to my surprise my daughter did too! She would literally get excited to see it in one of her workbags! I guess she liked the idea of being timed?!?!?

Math: We used Singapore Math (Primary Mathematics Std Ed) 2A and 2B. (We are still finishing up 2B. I love Singapore Math…but…I am also a former math teacher. Now, my daughter…on the other hand is not so fond of math. She likes to have it as her first assignment…so that she can get it over with…

Science: We used the books from the Adventures in My Father’s World curriculum and loved them, though we didn’t get around to doing nearly as many experiments as I had hoped. I think this had to do with us unexpectedly moving to another state during the school year.

History/Geography: The focus was on U.S. History and Geography. We used the Adventures in My Father’s World curriculum. My daughter L.O.V.E.D. American Pioneers and Patriots! Really, all of my kids enjoyed it. You could almost hear a pin drop whenever I would read it to them!

I had planned to use the Liberty Lapbook, along with it, but only ended up using a few pages from it. In all honesty, I forgot that I had it. However, we did supplement a lot with Road Trip USA created by my pal Erica! My daughter liked Erica’s state sheets much better than those with the MFW curriculum.

Art: We used I Can Do All Things

, which is part of the Adventures in My Father’s World curriculum. In all honesty, we did not use this nearly as much as I thought we would have…not really sure why…but we still have LOTS of blank pages in it!

Music: We LOVED all of the music from the Adventures in My Father’s World curriculum. My kids had LOTS of fun dancing around with each other to The Nutcracker and Swan Lake!

Typing: The plan was to use Typing Instructor

. We have it, but never used it. I have no good explanation of why we didn’t use it…we just didn’t. But I plan to use it this year!

So, here are our thoughts about my boy’s kindergarten curriculum…

Spelling/Reading: We used and LOVED My Father’s World from A to Z. Although it is a complete kindergarten curriculum, I did not use all of it. I omitted their ENTIRE reading program and I used Spell to Write and Read instead. I don’t think their reading program is necessarily lacking…I am just used to SWR, so that is what we went with!

Math: While I did use some of the the suggested math activities in My Father’s World from A to Z, I started the boys out with Singapore Essential Math Kindergarten A and B. They completed the books and seemed to like them; as do I.

Science: Science was integrated into My Father’s World from A to Z. We LOVED having our Butterfly Garden

and after months, we still have one single ant left in our Ant Hill

Handwriting: The boys picked up cursive fairly easily! We used Cursive First. It doesn’t really seem like a fancy program, but it worked!

Well, I had some fairly grand plans for Tot School, but I was a Tot School drop-out this past year! I feel like my focus was more-so on the older kids. Rather than intentional activities, I just tried to find things to occupy the little guys so that I could work with the older ones. Yes, I am embarrassed to admit that, but it is true…but I WILL do better!

Subjects we did (or were “supposed” to do) together:

and Plants Grow Up

. It didn’t happen. I love the books and the activities, but I just didn’t use them like I had planned…I think they are great and I am really hoping that I can find a way to implement them this year! 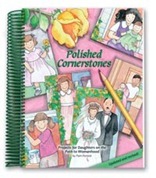 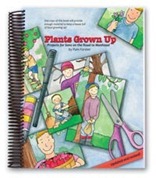 African American History: Much like my “Brown Like Me” Book Review, I want my kids to not only read books with characters that look like them, but I also want them to have a sense of their history. So, I had grand plans of coming up with lessons for them based on famous African Americans in history. Well…that hasn’t happened…YET! But it is in the works for this year!

Spanish: Oh, I SOOO wanted to use La Clase Divertida. I love the idea of all the hands-on activities incorporated into the lessons! However, we started the first video and I had to turn it off. They were going over the vowel sounds in Spanish and I was completely terrified that my kids would confuse it with English vowel sounds and that it would set them back in their reading/spelling. I know my fear may not be that valid, but it was enough for me to put Spanish on hold. So, amidst my uncertainty, we just ended up watching some Spanish videos from the library. Needless to say, I am in need of a Spanish curriculum…any suggestions??

Life Skills: Oh, I was SO excited to use Keepers at Home and Little Contenders for the Faith. But we didn’t use them and I didn’t start a Keepers Club, though I did talk to a few moms about it prior to moving…

PE: I found The Ultimate Homeschool Physical Education Game Book at the library and I had every intention of using it, but never did a single activity in the book. Sad to say, I know, but we did spend lots of time at the park, though I am not certain that really counts as PE! Any PE suggestions???

Nature Walks: I didn’t do so hot at this one either…unless walking to the park counts!

Crafts: Well, we love crafts and we did quite a few of them…just didn’t get around to blogging about a lot of them…